So, this race was my first OFFICIAL ultra-marathon…for the past two years, I ran half of the race pacing a friend or two. In 2011, I helped pace Kris Lawrence. In 2010, I helped pace Thomas Hicks. But this year, I decided I would throw my hat in the ring and actually try to race it.

I didn’t necessarily have any huge expectations for this race, but I did set a few small goals that I had hoped to acheive. 1.) Finish under 4 hours. 2.) Run a smart and conservative race for the first half, then open it up the second. 3.) Get my nutrtition on point and not crash and or lose significant energy over the second half of the race. 4.) Keep my heart rate in a conservative zone and do as little damage to my body as possible.

From the start, I had no intentions to “race” anybody. This year, there was a tough and competive crowd. Billy Edwards (last year’s winner) was back and looking to claim his title, Drew Midland was there (though he was only pacing), the always impressive and consistent, Steve Speirs was back and ready for business as usual. There was also an impressive ladies field, a few of my fellow HRR teammates and also a few first timers who were going to put up a great race.

So…with a very competitive top 10 in the field, I decided to run MY race and not get caught up in the hoopla. I made it a point to let the front crowd go out at their quick paces and let the race unfold however it may. My plan was to stay conservative for at least the first half of the race, not get passed by any other racers, and hopefully, with any luck, pass a few of the other runners along the way.

For the first 3 miles, I was running along with 3 of my good friends/training partners, Thomas Hicks, William Tallent and Renee High…we were pretty much doing our normal “long run” routine of laughing and having fun. Renee wasn’t racing and was out getting in her long run, so she decided to keep me company for the early miles of the race.

There wasn’t really any pace strategy for the race..but, I did want to negative split the race if at all possible (meaning, I wanted the second half to be faster than the first). After going conservative for the first half of the race, I came off the first loop of Osmanthus with an average pace of 7:16. At this point, I was still feeling awesome and was feeling really strong, but, 16 more miles is still a loooooong way to go and anything can happen.

Throughout the race (every 30 minutes), I would take my race fuel and hydration. For this race, I chose to go solely with my liquid (homemade) energy drink (combined with two scoops of UCAN) and my supplements. Every 45 minutes, it was a capsule each of calcium/magnessium/potassium/taurine/beta alinine/arginine/rhodiola… I took no gels for the race. I did however grab a handfull of Skittles at the 2nd to last aid station…I had ran out of my energy drink and I wanted to have a bit of sugar in case I needed it. I took the entire handfull of Skittles and put them in my mouth and sucked on them for the final 8 miles…if you suck them and don’t chew them, they will last for a long time and will dissolve slowly to give you a steady “drip” of sugar.

Another pre-race plan I had, was to keep my heart rate below 160 for as long as possible. My typical training paces for a moderate 60%-80% effort will reflect a heart rate zone of 130-158. For this race, my heart rate stayed in the mid 150’s the entire race, until the last mile, where I was pushing the pace a bit. Average heart rate for the entire run was 154…this was my most prized accomplishment for this race!!

At mile 17, I decided to see if I could start picking up the pace and start picking a few runners off. I passed a couple runners between mile 17.5 and mile 18.5. At about mile 19, I was creeping up on a pack of 5, that included Steve Speirs, Drew Midland, Steph Manny, Howie Hodapp and another runner (Ed). I ran for awhile with Drew and Steph, with Steve and Ed staying a consistent 40 meters ahead.

All the way down the narrows, I watched Steve and Ed slightly in front of me…at the turn around, Steve and I shared a few words of encouragement and at that point, he decided to make a move and make it a race. My pace never slowed from that point on, yet, Steve kept getting further away…there was a decision to be made at this point. Do I try to stay right behind Steve and his now mid 6:00 tempo, or do I continue to stay in my steady zone and let him go? The decision was to let him go. Steve has much more long distance race experience than I and he is a tough bastard as well. If it were the final mile, I would have been confident in my speed..but with 8 miles to go, Steve had the advantage and I knew that. I did not want to go completely in the well for this race and I knew that going with Steve would have put me there…over the next 8 miles, he put about 3 1/2 minutes time on me…but considering I never slowed my pace, I can live with that..Live to fight another day.

At this point in the race, I was sitting in 5th place. I knew catching Billy Edwards was out of the question and the way that Steve took off, chances were not good that I would catch him again, either. So, I was hoping that maybe the other two guys in front of me, might be struggling and perhaps I could pick one or both of them off. With a mile to go, I got my wish! I saw the previously ranked 3rd place guy up ahead of me as we were nearing the end of the dreaded Osmanthus trail. It was obvious that Steve had overtaken this guy and was comfortably on his way to at least a 3rd place finish. As I trailed the guy for a half mile, I knew he was hurting…I decided to stay right behind him until we got off of Osmanthus…this would be exactly a half mile from the finish line and I knew I could out kick him and use my speed to my advantage. As soon as we came off the side trail and hit Cape Henry, I sprinted past him and kicked toward the finish. I ran the last half mile at a sub 6:20 pace, finished in 3:43:57..good enough for 4th place overall..behind some damn good runners!!

To be honest, I couldn’t have been more satisfied with the way this race turned out. For awhile now, I have been curious of how good my fitness actually was. I had been putting in some great training runs, but had not really raced all year. For the entire year, I have been putting a “non-typical” distance running schedule together. For 11 months, I have averaged only 32 miles per week and have only had a handful of weeks total for the year that have been over 40 miles.

All year, instead of focusing on mileage, mileage, mileage…I decided to go with a different approach. I focused on quality running, lots of xtraining (swimming, aqua running, weights, core and balance excercises). I also put a lot of emphasis on nutrition, recovery and perfecting the best race fueling and hydration practices.

This was the longest distance race I have ever ran and I can honestly say, it was hands down, the EASIEST!! I never crashed, bonked or hit the wall. I felt stronger and stronger as the race went on. I negative split the race by a significant amount and I was able to throw down my fastest mile of the race in the last mile. 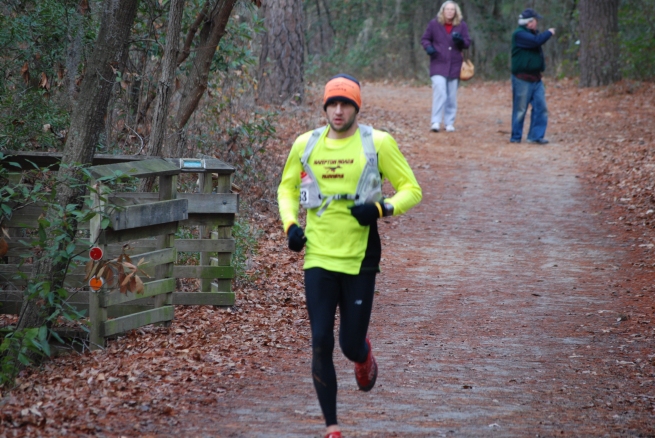 This was my “BOOYAH” race! I am not one to boast or brag..but this race was for all those naysayers..all those who said that my “low mileage” plan was silly and that it wouldn’t work for the long distance races…Well, I guess perhaps they were wrong.

It is also worth mentioning that I woke up this morning without a sore muscle in my body…I felt great today and spent the entire day on my feet, with my wife, walking around doing Xmas shopping.

I did the research, I made myself a guinea pig, I stuck to the plan despite all the negativity that I heard…. and finally, “the proof is in the pudding”!