Yesterday was just one of those days, one of those AWESOME kind of days!! Crystle was out of town and in Rhode Island this weekend for her bridal shower…yep, yesterday marked exactly 2 months until our wedding. In 8 weeks, we will be heading to Rhode Island to get married in front of our family and friends. We have been together for going on 6 years now and this summer we will finally become husband and wife…it’s going to be an amazing day and she is certainly my best friend and biggest supporter.

So, with the oppurtunity to live the single life this weekend, what kind of fun and trouble was I going to get myself into? Well, it turns out that fun and trouble were in the forms of running and hanging with friends.

Got up early (5:00am) to start getting ready for the CHKD 8k at Waterside in Norfolk. It had been about 7 months since I last ran an 8k and this one was going to be with Team Hoyt. I hadn’t ran a race with Team Hoyt since the Boston marathon in April and I was really excited to be back doing what I love and being around our amazing riders and Team Hoyt family.

For this race, I got the opportunity to push Miss Bella, one of our amazingly beautiful (and sometimes sassy) rider athletes. 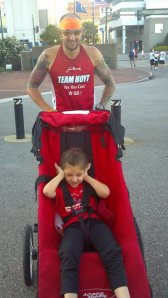 Going to the starting line of this race, I really had no idea what to expect in terms of pacing. I have been doing a lot of speedwork and short distance training and I had just done a hard workout on Thursday. But, as always when I push for Team Hoyt, I get a huge sense of motivation from the aura that our rider athletes emit. I won’t necessarily lay it all on the line for my own races, but when I get behind that chair, something comes over me and I am willing to bury myself to keep my rider smiling and having fun…Bella said she wanted to go fast and if that meant running until I fell apart, then so be it. I hold nothing back when I run for Team Hoyt and that wasn’t going to change today.

Normally, Team Hoyt runners/rider athletes get a “head start” on the rest of the race field. By getting a head start, it gives us a bit of time to get clear of the field and not have a massive pile up and traffic jam near the start line.

But, for this race, I wanted to start WITH the field so that I could help pace and run with some of my HRR buds. I spoke to Greg from J&A racing (the race director and timer) and asked him if I could start with the field instead of going out with Team Hoyt. He said it would not be a problem, so that is what Bella and I did.

So, at 7:30 am and 1 minute after the Team Hoyt start, Bella, myself and the rest of the field were off and running.

Initially, the plan was to go out around 6:10-6:15 pace, with a finishing goal time of  31-32 minutes. I was hoping to help pace several of the HRR boys who wanted to be in that window of time and I was hoping I could hang on the entire time and finish with them. Well, that plan dissolved pretty quickly..LOL!

From the gun, I felt really good and went out pretty quickly. After a really fast first half mile, Bella and I finally settled in behind Renee High, Steve Speirs and and William Tallent. The first mile we were at 5:48 pace! Much faster than the original plan, but, I decided to just hold pace and see what happened. Somewhere between miles 1 and 2, Steve and William started pulling away a bit, so I just ran along with Renee for a mile or so. Mile 2 was 5:48!

At this point, I was still feeling really good and was hoping to go top 10 overall. Looking ahead, I could see the runners I knew and the ones I knew I couldn’t catch. Clearly, I wasn’t about to catch Ryan, Caleb, Justin or Steve, but there were several other runners who I thought I might be able to pick off to get within that top 10 spot.

Mile 3 came pretty quickly and looking at the splits, we came through the 5k right at 18 minutes. It was right around this point that we finally reeled in the number 10 and number 9 runners (if I had counted correctly). Turning to look over my shoulder, it didn’t appear that anyone else was moving up on us and at this point I figured that if we could just maintain pace and hold steady, we would finish in our current position.

Mile 4 was kinda a blur. We weren’t passing or getting passed, so we were more or less in solitude since there isn’t much crowd support in the areas between miles 3 and 4. Now, with just under a mile to go, we were turning and transversing our way through the streets of downtown Norfolk. Up ahead I could see Steve Speirs and two other runners. Steve and one other guy were too far ahead to worry about, but runner # 3 looked like he was fading a bit, so with a half mile to go, I tried to run him down, but ended up running out of real estate..Closing with a fast half mile, Bella and I crossed the finish in 29:30, was 9th overall and 1st in the age group!

I was really happy with this race and with the time that we finished at. Normally, my shoulders and upper body get really tired from pushing…but, with all of the swimming, core and strength training that I have been doing, the upper body fatigue was never a problem this time. This has been something I have been working on for awhile now..so I am very please with that.

So, aside from what Bella and I accomplished, there were also many great races ran by my fellow training partners and Team Hoyters’. Several PR’s were set and there were several top 3 finishes and AG awards won.

Another JOB WELL DONE goes to Marc Leber and his mother Andrea Leber! They both recently become members of Team Hoyt and they pushed together in their first race and did AMAZING!! Great job Leber family!

So, with some good racing behind us, what else was I to do with my day? I know, how about a BEACH BASH!! Later in the day would be the annual HRR Beach Bash.

This annual event always proves to be fun and full of laughs. With many new members having joined since last year’s bash, we had 115 runners RSVP’d. With some great leg work and organizing done by Thomas Hicks, David Phillips and Aric Martinez, we had a DJ, lots of good food and drinks and a great, great time!!

For 4 hours from 2-6pm, there was laughing, swimming, good times and even a Hoola-Hooping contest, which I think I won, even though there was no official award presentation 😉

So, with the weekend coming to a close, I am just sitting here, waiting to go and pick up Crystle from the airport. Though I wish she could have been here to share this great weekend, I had a lot of fun thanks to great friends, great racing and great times.

Sometimes I don’t think my life could get any more perfect (unless I won the lottery of course)! Take a look at the photo gallery to get an idea of this fun filled Saturday!